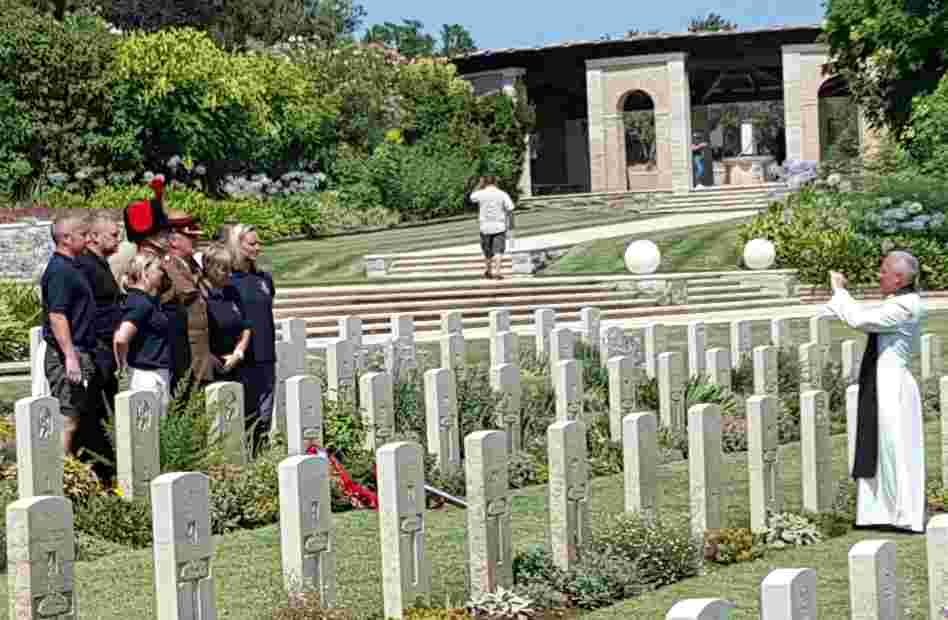 This battlefield study was part of Ubique 300 and a special battlefield study to Italy, in the footsteps of the Bolton and Manchester Artillery on the battlefields of the Sangro and Moro Rivers and Monte Cassino, as part of Ubique 300. 53 (Bolton) Field Regiment were the nearest thing in the Second World War to the pals or sports battalions of Kitchener’s Army raised in 1914. In March 1939 Hitler reneged on the Munich agreement and invaded Czechoslovakia. The following weekend the team captain of Bolton Wanderers football club, Harry Goslin addressed the crowd and called for supporters to join the TA. It was not enough to deplore what was going on in the world. Hitler would need to be stopped. He and the team were joining up.

The story of what happened to Harry Goslin is told in an earlier post, written close to the 70th anniversary of his death. It was mainly based on general histories of the battle and material available on line.

updated to show the

updated to show the

A visit to the National Archives and the war diary of 53 Field Regiment revealed more details about the story and the experience of the soldiers.

The maps in the general histories portray the attack mounted by the 8th Indian Division on 14th December as an arrow from Villa Rogatti west north west to to Villa Caldari. The fire plan in the 53 Rd Regiment War diary shows a barrage by the divisional artillery supporting an attack north from the road between these villages, which curves first west then north. When superimposed on the 1:50,000 map the first line of the barrage is 50 yards north of the candy stripe road, an obvious start-line. 52 and 116 Field Regiments fired the lines of the barrage. 53rd Field Regiment fired a flanking barrage, three lines of shells fired at right angles to the main barrage to protect the left flank of the attack, exposed to enemy fire from the lateral road. All points calculated by hand in damp, cold dug out command posts.

The war diaries referred to the abysmal quality of the maps, with features up to 500 metres from their true location. It wasn’t much easier to find locations on modern maps. It is hard to find maps with more detail than 1:200,000 and the information on different publications can be contradictory, and at variance with the features on the ground.

But the 53 Field Regiment gun positions seemed obvious. Plotting the battery locations on the 1944 map showed East of the road between S. Vito Chietano and Lanciano. west of Treglia The best fit of the 1944 map with Google maps put the gun positions just to the side of what is now a road through the edge of a village. This made sense. The fire plans called for hundreds of rounds of ammunition per gun per day. The weather in December 1943 was bad with the fields and tracks reduced to mud. The War diary noted that it was difficult to extract the guns from their old positions and that it took six hours before two of the batteries were ready after moving a couple of miles. Gun positions would need to be close to the driest ground. An old lady remembered, “yes. The guns were just over there”. What is now an olive grove was a field in 1943.

There were also some VIPs. Harry Goslin’s son Bill and grandson Matt came to make a visit, their first to Harry’s grave, and to find out about what happened to him. Lieutenant Harry Goslin was mortally wounded as a forward observer, a task usually carried out by a captain troop commander. Harry’s normal role should have been on the gun position, either in a troop or battery command post or as a gun position officer. The command post officers were responsible for supervising the soldiers who calculated what direction the guns should point to hit any given target. This was difficult and tiring work, but not as dangerous as accompanying the infantry, with the higher risks from bullet, shell or mortar bomb.

The 53 Field Regiment War Diary provides evidence of the pressure on the officers and soldiers who served at the sharp end. On1st December, after a week long battle on the Sangro Rover one battery commander had been evacuated with exhaustion The nearby 1st Canadian RCHA attacking on the right of the Indians lost four out of six FOOs over four days. Officers and signallers from the guns would have to take their turn at the OP. It was as a stand in OP Officer that Harry Goslin crossed the start line.

The attacks along the Adriatic coastal plain halted a month later on the next river line, the Arielli, with winter snow.  Four months later, the 8th Indian Division with the 52nd Manchester Artillery and 53 Bolton Artillery crossed the Apennine mountains  in secret to deploy South of Cassino.   Here the allies had tried battering a way through what was the strongest part of the German defences between December 1943 and March 1944.

The allies concentrated both of their armies to break through the German army on the front facing Rome.  This time the allies assembled a force of 1600 guns, including those of 52 (Manchester) Field  and 53rd  (Bolton) Field Artillery Regiments. These blasted a path across defences which had stopped the allies over the preceding months. Not without a hard fight or losses. The commonwealth War

Graves Commission records list 184 members of the Royal Artillery who died in Italy during May 1944. 110 are buried or commemorated in the Cassino War Cemetery. Twelve of the dead served in the 52 (Manchester) or 53 (Bolton) Field Regiments.